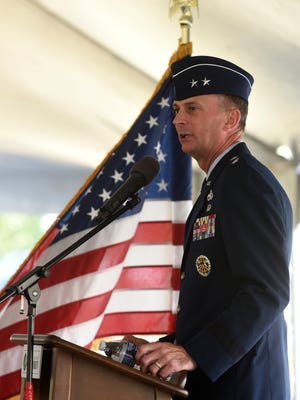 The air force base is gone, but the jobs, the jobs remain

Editor’s Note: This story was originally posted on October 5, 2016 to commemorate the 20th anniversary of the Port Authority.

HEATH – The announced closure of Newark Air Force Base dealt a devastating blow to local workers, families and the economy a generation ago.

But 20 years after the base closed, the anniversary is not a time to mourn what has been lost, but to celebrate what remains at the Central Ohio Aerospace and Technology Center.

Major General Warren Berry, vice-commander of the US Air Force Materiel Command, came from Dayton to salute the efforts of local leaders and longtime employees of the former base during a celebration of the 20th anniversary Tuesday outside the Horton building on the COATC campus.

The base closed on October 1, 1996, giving way to the birth of the privatized COATC, where 15 employers now provide $ 88 million in wages to 1,300 employees. The Heath-Newark-Licking County Port Authority manages the campus and continues to attract new business.

“The Newark Air Force station could have been forgotten after it closed if it weren’t for some community leaders who had incredible vision,” Berry said. “Time was passing. There was no uncertainty as to when October 1996 arrived and it was the deadline for deciding what to do.”

There were many obstacles, Berry said, to what became the country’s first privatization in place of an Air Force base. One obstacle, he said, was the Air Force itself.

“Some Air Force members weren’t sure this was the right thing to do,” Berry said. “Everyone had concerns.

But moving Heath’s sensitive Air Force metrology, calibration and inertial guidance system to another location would be time consuming and expensive. Precision equipment had been at Heath since the 1960s for a reason.

“We just didn’t have a suitable alternative for this kind of job,” Berry said. “The geology of this place makes it particularly suitable. You don’t have a natural vibration. That’s a good thing.”

The site is no longer Newark Air Force Base, but guidance system repair work remains there at Boeing and its subcontractors, and metrology work remains at Bionetics and the Air Force Metrology and Calibration Program.

“In an uncertain world, we certainly need guns that go where they are supposed to go,” County Commissioner Tim Bubb said.

Former County Commissioner Don Hill, who helped transition from the base to the aerospace campus, said: “It is a pleasure to be here today to celebrate 20 years. A lot of people thought that this would not happen and that it was a waste of our energies. and time. We were more than delighted and now we are the happiest people in the world that it has worked. “

The 20th anniversary was also an opportunity to recognize the more than 200 campus employees who have at least 20 years of experience there, including Carl Oblinger, 54 with Bionetics, and Mark Henderson, 53 with Boeing.

“Today we are celebrating 20 years of success for our community, but most importantly, for our national defense,” said Port Authority Executive Director Rick Platt.

How long has it been around?