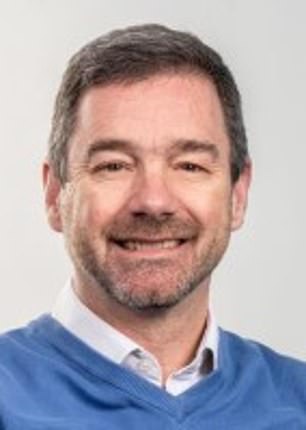 By Susie Coen Deputy Editor of Investigations for the Daily Mail

Water companies imposing restrictions on millions of customers sparked outrage yesterday after their staff were revealed to be working from home as England faces its driest spell for nearly a year half century.

A Daily Mail audit of hundreds of jobs advertised by five major suppliers implementing watering bans found that for more than a third of positions employees could work from their sofas for at least part of the week .

Surprisingly, the companies declined to say whether their chief executives had gone to office as the country faced a crisis.

The home of Lawrence Gosden, who took over as head of Southern Water last month, is believed to be a four-hour journey from the company’s headquarters in Worthing, West Sussex.

Surprisingly, the companies declined to say whether their chief executives had gone to office as the country faced a crisis. On the left, Lawrence Gosden, who took charge of Southern Water last month; on the right, Sarah Bentley, boss of Thames Water

Pay for bosses of UK water companies rose by more than 20% last year, with executives earning an average annual bonus of £670,000.

Cabinet Minister Jacob Rees-Mogg said ‘it can’t be a coincidence that failing businesses and public services are working from home’.

He added: ‘Wessex Water has a busy head office led by the example of its CEO [Colin Skellett] who was in the office throughout the pandemic. It has no watering ban and was well prepared for the dry weather.

Patrick Sullivan, of the Parliament Street think tank, said: ‘It’s no surprise Britain has such leaky infrastructure when water chiefs are encouraging a culture of relaxation at home.

It was the driest year since 1976 across swathes of the country, with watering bans set to last until October.

Almost a third of the 135 job postings on the Thames Water site last week mentioned working from home, with some jobs explicitly stating “100% remote working from the start”.

The firm declined to say whether boss Sarah Bentley, who earns a salary of £2million, was in office this month.

For Southern Water, more than half of the 110 job postings included details of working from home up to three days a week. The company would not disclose whether chief executive Mr Gosden visited the office this month.

110 job postings included details of working from home up to three days a week. The company would not disclose whether chief executive Mr Gosden visited the office this month.

England is facing its driest spell for nearly half a century and nine regions across the UK have declared drought status. Pictured: Dry cracked earth at Baitings Reservoir in Ripponden, West Yorkshire

A third of job postings for South East Water and Welsh Water mentioned ‘hybrid’ and ‘flexible’ working options, such as one day in the office a week.

Wessex Water is allowing staff to work from home “by agreement” for up to two days a week.

A Welsh Water spokesperson said this ensures that “each of our colleagues works in a location that reflects the need for their role”.

South East Water said its “flexible working policy for non-operational staff is designed to attract the best talent across a range of skills”.