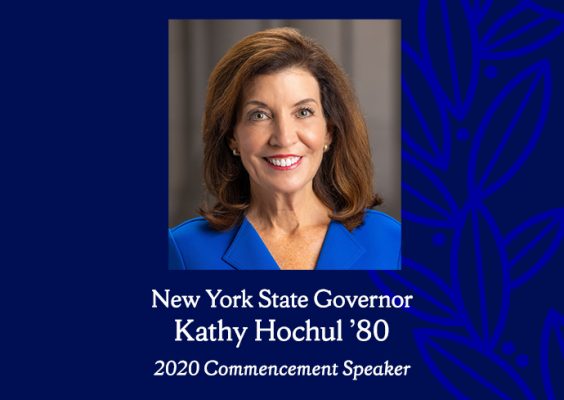 New York State Governor Kathy Hochul ’80, the state’s 57th Governor and first woman to hold the highest office in the state, will deliver the keynote address at the Class of 2020 launch ceremony ‘Syracuse University on Sunday, September 19 in the stadium. The ceremony also celebrates the Class of 2020 of the SUNY College of Environmental Science and Forestry. Hochul, a former student of the College of Arts and Sciences at Syracuse University and the Maxwell School of Citizenship and Public Affairs, was sworn in as the state’s chief executive on August 24.

“It is an honor to welcome Governor Hochul to campus to address the graduates of the Class of 2020 and their families,” Chancellor Kent Syverud said. â€œShe is a New York Citizens Champion and a committed advocate for Syracuse University and SUNY ESF. The governor is a member of an esteemed group of Orange alumni who have answered the call for public service. For these reasons and many more, Governor Hochul is an appropriate choice to address the Class of 2020. “

Hochul, who was head of government and strategic relations for M&T Bank until her appointment as lieutenant governor, has been state lieutenant governor since 2015. As lieutenant governor, Hochul has served as president of the New York State Senate and State Liaison Officer to New York State. federal officials in Washington, DC She chaired the state’s 10 regional economic development councils, the state’s Workforce Investment Board, the 100th Anniversary of Women’s Suffrage Commemoration Commission, and the Task Force on New York State’s heroin and opioid abuse. She also led the state’s “Enough is Enough” campaign to combat sexual assault on college campuses. Hochul participated in a roundtable on sexual and relationship violence at Syracuse University in April 2015.

â€œIt takes a certain caliber of people to attend Syracuse University – they are engaged, care about the community and come from many backgrounds,â€ said Governor Kathy Hochul. â€œSyracuse University has given me the opportunity to spark my activism, while providing a caring, stimulating and diverse community. Congratulations to the Syracuse and ESF classes of 2020 – you have created a special bond with your fellow graduates and alumni that will last a lifetime. Now is the time to step out into the world and not only to do good, but to do good – and Syracuse has prepared you well for it.

A former member of the United States Congress, Hochul represented the 26th Congressional District of New York in western New York from 2011 to 2013. While serving in the United States House of Representatives, Congresswoman Hochul was among the House Armed Services and Homeland Security Committee, traveling to Afghanistan to meet with military leaders and meet active duty men and women. His goal in Congress was to create jobs and reduce the skills gap by bringing businesses and universities together, and creating opportunities for returning veterans.

Prior to her election to Congress, she was a practicing lawyer, member of Hamburg City Council (1994-2007), Deputy County Clerk (2003-07) and Clerk (2007-11) of Erie County in the west from New York. Earlier in her career, she served as legislative assistant to Congressman John LaFalce and Senator Daniel Patrick Moynihan (D-NY), a university professor at the Maxwell School, and was instrumental in drafting the legislation. on the reform of the financing of electoral campaigns, the reform of immigration and the fight against drug abuse.

Hochul arrived at Syracuse University in 1976 to major in political science. She took courses in political science, including modern American politics, Russian politics, and constitutional law. She also engaged in debates, sharpened her public speaking skills, and participated in student government. She received a BA in Political Science from Syracuse in 1980 and holds a JD from Catholic University in Washington, DC.

Syracuse University is a private research university that advances knowledge in all disciplines to foster breakthrough discoveries and cutting-edge leadership. Our collection of 13 schools and colleges with over 200 customizable majors bridges the gap between education and action, so students can take on the world. In and beyond the classroom, we connect people, perspectives and practices to solve interconnected challenges with interdisciplinary approaches. Together, we are a powerful community that moves ideas, people and impact beyond what is possible.