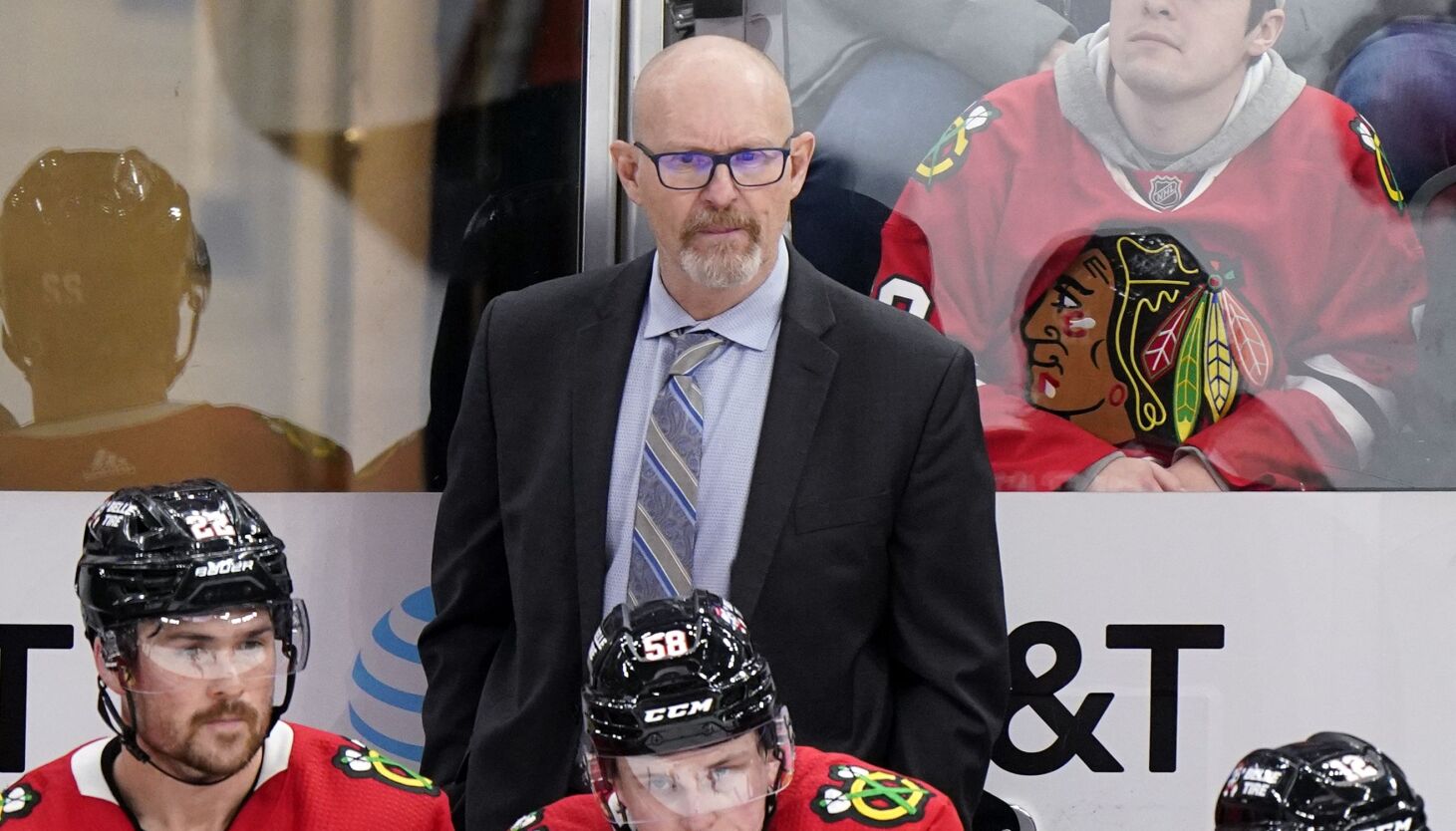 Derek King comfortable in new role as Blackhawks assistant: ‘I have no ego about it’

Derek King was sitting around his Florida vacation home in June when Kyle Davidson called with news: He had hired someone else to be the Blackhawks’ new coach.

But Davidson told King to sit tight for a few days before looking for other job openings.

“I waited,” King said Friday. “Then all of a sudden I was having great conversations with Luke [Richardson], and he asked me if I would be willing to come on board to help them. I guess Kyle and the rest of the staff had a lot of good things to say about me and felt I could still contribute. So after that, it was piece of cake. We just finished contract negotiations, and I’m back with the Hawks. »

Behind the scenes during the intervening days, Davidson — the general manager who appointed King as interim coach last November — had approached Richardson, his new pick as coach, about the possibility.

“When we brought Luke and [started] develop a profile of the coaching staff, we wanted really good people,” Davidson said last month. “We wanted a group that’s going to drive a really positive culture. Derek is someone who is emblematic of this company. [To] Luke, we said, ‘We really like Derek, but we’re not going to impose anything on you. It’s your staff. ”

It is rare for an interim coach to return to the same organization the following season in a lesser role – in this case, as one of three assistant coaches. Egos usually get in the way, both ways. Former interim coaches often don’t want to start reporting to anyone else, and new coaches often want to wipe the slate clean to bring in their own assistants.

Of the six other interim coaches besides King around the NHL last season, three (Edmonton’s Jay Woodcroft, Vancouver’s Bruce Boudreau and Montreal’s Martin St. Louis) dropped the interim tag, while the other three ( Andrew Brunette from Florida, Mike Yeo from Philadelphia and Dave from Winnipeg Lowry) did not return and therefore left for different organizations (New Jersey, Vancouver and Seattle, respectively).

But King’s flexibility, humility and affability are also rare traits in NHL coaching, and they make him better suited than anyone to navigate this unusual transition.

He admitted to feeling some initial disappointment that he did not retain the top job. Still, he wanted to stay in northern Illinois, as the area has become home to his family – although they are moving from Rockford closer to Chicago this summer – and he saw no problem with a role as ‘assistant.

“[In my] conversations with Luke, I felt really comfortable, and I felt he felt comfortable, that we could work together and that I would be a good fit for him,” he said. “I wasn’t angry. I wasn’t going to talk to him because he got the job. I have no ego about it. I would have liked to have had the position, but I am more than happy and privileged to be part of the organization.

King and Richardson apparently know half the hockey world, but their social spheres were barely inclusive before this summer. Their memories so far have mostly consisted of playing against each other in the OHL in the mid-1980s. The same goes for King and his new assistant, Kevin Dean.

King is quite familiar with the Hawks’ other new assistant, Derek Plante. They played together in 2001-02 with the Munich Barons in Germany.

The philosophies and visions of the four coaches nonetheless align well, and they have begun to roughly divide tasks between themselves, although more specific job descriptions will be ‘carved in stone’ by the start of training camp. September 21.

King and Plante, as forwards during their playing careers, will focus more on the attacking side, while Dean, as a former defender, will focus on the opposite side.

“Luke is quite similar to me,” King said, “[in that] we will have details of the work, but we will all work together, help each other and give our opinions on things.

An assistant role with more hands-on training opportunities and a narrower column of responsibilities could also play more to King’s strengths.

He was thrown into the fire last year, his first as an NHL coach in any capacity, when he inherited a poorly built and mentally broken team abruptly 12 games into a lost season. . He did a much better job than his predecessor Jeremy Colliton, restoring morale in the locker room and guiding the Hawks to a respectable 27-33-10 record given the circumstances the rest of the way, but the situation still challenged his abilities. to the test. .

Asked to reflect on the knowledge he has gained, King – humble as always – was quick to point out his mistakes.

“The most important thing I learned was to take more control over the team,” he said. “You are busy as head coach. You’re dealing with all these different people on the outside. And I may have strayed a bit from the coaching part.

The experience convinced King, who had always considered himself a purely minor league player, that he had the chops — and the ambition — to be an NHL head coach. This thought clearly lingers somewhere in the back of his mind.

“If I had that opportunity again, I would take more time to do those little things that I’ve always done,” he said. “I have always made video [analysis]. I have always broken games. I’ve always been much more involved in the training part.

But for now, he’s looking forward to his first camp and his first full season as an NHL assistant, even if the path he’s taken to this milestone hasn’t been exactly conventional.

“It will be much easier,” he said. “I will have a lot more time to do what I love to do: sit one-on-one with strikers, show them clips and work with them after training. Stuff like that.”

Beautiful elevators to spruce up your home

Interview: Artificial intelligence in smartphones, what is it for?