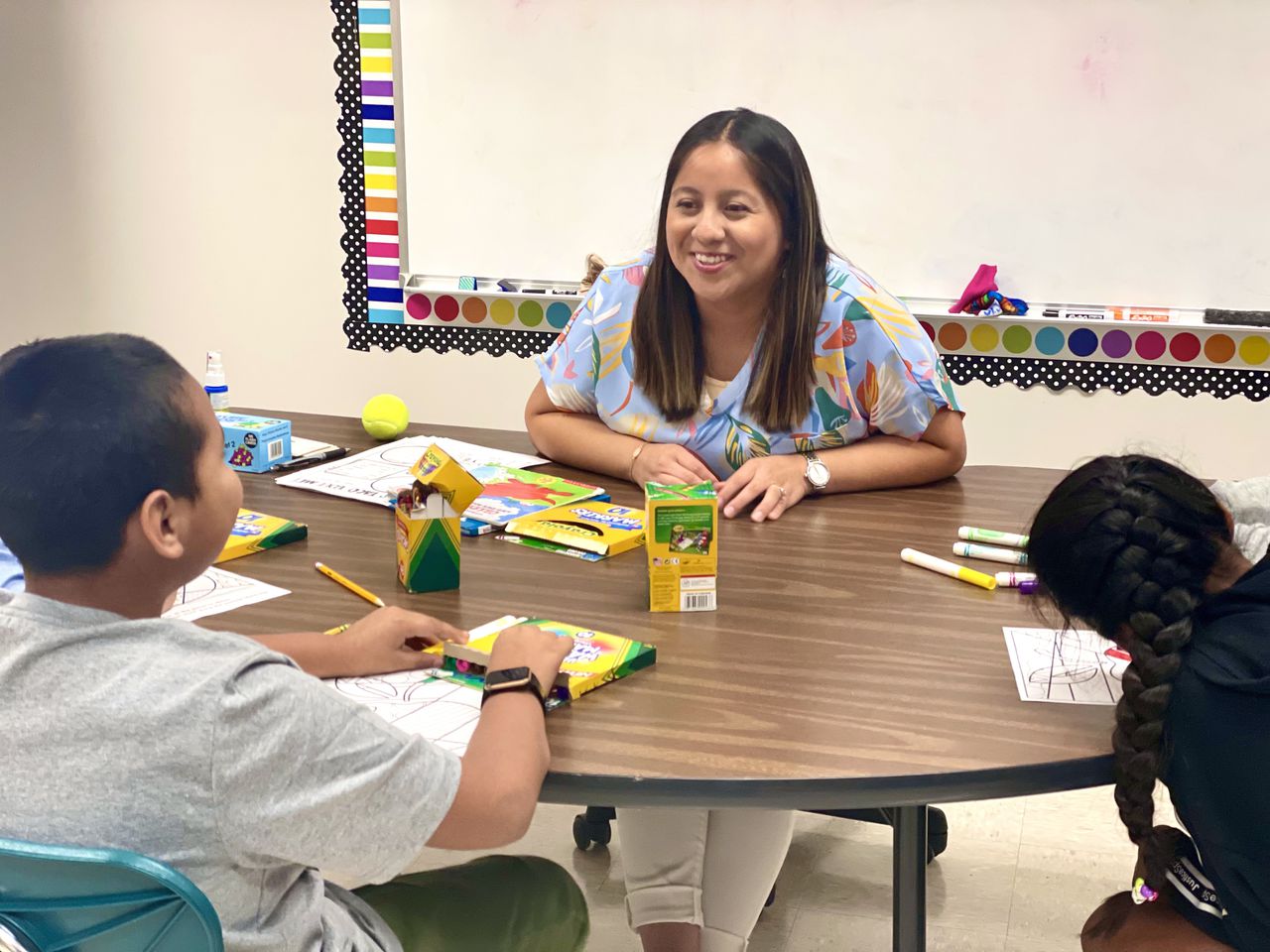 Back to School 2022: New Alabama teachers with social work and helping experience are key to the pipeline

As the students return to school, a new class of first-grade teachers steps in to teach them.

They are relatives. They are former social workers and translators. Some of them return to their hometowns to teach in the schools where they grew up.

Success, for the state, could look like adding more people to the teaching staff who are leading classrooms in Alabama for the first time, but who have previous experience in other states, as aides or in uncertified roles.

Diandra Holman, a new third-grade teacher in Birmingham, is one such educator. A native of Huntsville, Holman returned to Alabama this year after teaching at a dropout prevention high school in Ohio.

Every day, she tells her new students that she’s not just their teacher. She is also their lawyer and she expects them all to get up when they are down.

“We need educators,” Holman said. “But I have the impression that we scare them away. We never speak well to anyone. We never tell them about the lives we impact.

It is difficult to know the exact extent and nature of vacancies, and how these figures may factor into broader concerns about teacher shortages.

But the researchers were able to identify a few key patterns: Rural and high-poverty districts typically face higher teacher turnover rates, and across the state, schools typically struggle to attract science and science teachers. mathematics, special education and high school.

Fewer teachers are also graduating from college teacher preparation programs in Alabama, a trend of the past decade. In response, the state has lowered certification requirements, offered incentives for hard-to-recruit subjects, and is seeking to fund more alternatives, like personal development programs.

Other districts, however, may have many positions filled but may not have enough bilingual educators, local applicants, or teachers who share similar racial or ethnic backgrounds with the students they teach. These are shortcomings, experts say, that are equally important to consider.

As they prepared for their first weeks of school this month, AL.com spoke to new teachers across the state to see how they were managing their classrooms on their own for the first time. .

Many were nervous, but managed to overcome their fears. Some felt unprepared, but were surprised at how easily things went. All have high hopes for their students, with whom they are slowly learning to establish a relationship of trust.

Leona Rudolph has spent years working with children and families. But she’s never had to round up a class of freshmen before.

“When you work with young children, you have to ride the roller coaster and the wave,” she said with a laugh, as she returned home from her first day of teaching at Bay Minette Elementary on Wednesday. .

The former social services worker recently decided to pursue a career in teaching and enrolled in a program at the University of West Alabama, called Project Reach, which provided her with training and three teacher mentors. .

That level of support, she said, was a big reason she felt ready to walk into class on Wednesday. But that doesn’t mean she didn’t get a few curveballs on day one.

She had to revise the seating plan about three times. Snack time has gone slightly wrong. And the life-size stuffed tiger she bought was a little more entertaining than she expected.

But Rudolph was able to turn many of those small challenges into teaching and bonding moments — “It was organized chaos,” she said.

When the lights unexpectedly went out in the building, she made it a lesson in safety, letting her students know they were always safe with her.

At lunch, a student sat next to Rudolph and confided in him about a loss in his family. And later that afternoon, a girl who had been quiet all day came up to her desk and said, “I love you.” Then other students did too.

“I know for a fact that’s where I’m supposed to be,” Rudolph said. “We may not be the ones making the big waves, but we can make our little ripples.”

Terrance Cook knew firsthand what it felt like to take on challenges as a preteen. His family moved around a lot, which meant he transferred to several colleges. He even ended up getting kicked out of a few of them, he said.

So when faced with the choice of teaching sixth, seventh, and eighth graders as a first-grade teacher, he did.

“I want this challenge,” he told his mentors from Teach for America, a national program that trains candidates from diverse educational backgrounds to become teachers. “I love babies, but I wanted the older kids.”

Cook, who is the only social studies teacher at Inglenook Middle School in Birmingham, joins three other – mostly new – male teachers who cover every core subject at school. It’s a rare kind of community, since male teachers make up only one-fifth of Alabama’s educators.

“With all the men, it’s like a team. It’s like a great team effort,” he said. They have each other’s numbers and often communicate about issues that may arise in their main courses.

Cook, a father of two who previously worked with the Jefferson County Housing Authority, does his best to come to class with a calm demeanor. Standing at a height of 6ft 3in, he doesn’t want to be seen as a disciplinarian, he said. Instead, he has his own strategies for overcoming conflict, such as embracing the idea of ​​a second chance.

“No matter what,” he told his students, “if today is bad, there will always be another day.”

While organizing her class in the morning, MacKenzie Gillis was greeted by a few former students.

“Look, I have tissues!” the biology teacher told a group of James Clemens high school students. She had worked with them for the past year, first as an intern and then as a long-term replacement.

Now Gillis was back in high school, as a full-time teacher.

The teacher who was supposed to mentor Gillis had left mid-year, which meant Gillis was alone in a class full of high school students, while juggling hours of rigorous certification classes each week.

It was a difficult situation, she says, both for her and for the school.

“They were in the middle of a school semester,” she said. “They didn’t have time to stop and teach me the things that needed to be taught.”

This year, Gillis has a larger fund she can dip into for classroom supplies — like tissues and the laminating machine — as well as a name tag and access to the photocopier. And she also comes with a semester of lessons she learned along the way.

She now knows how to end a fight. She has a better idea of ​​her own expectations in class. She delved into macromolecules, a unit that was not included in her university courses. And she also knows not to assume skills that some students may already have, like how to take good notes.

“I think that’s why I was so excited today, and not nervous,” she said. “Because I know I’m supported and I know I have the tools I need to succeed.”

In a rural classroom in northern Alabama, Lety Vargas handed out packets of markers and coloring sheets to four young students.

Vargas, a first-generation English speaker, had returned to her hometown of Russellville to help teach a growing immigrant community. She had been translating for the district for a few years, but was recently able to get an emergency certificate to teach, and now has a full-time job while she works towards getting a full license.

On the first day, Vargas said she was a little nervous. Still, she managed to keep the conversation going that morning, asking them about their families and what they liked to do for fun. While the students were coloring, Vargas asked them about their goals for the year.

Vargas told them that was what she was here for – to help them succeed. They could always come to her if they didn’t understand something their teacher was saying or if they needed help translating a test.

“You are always welcome here,” she said.

Vargas kept asking questions, stopping occasionally to talk about his own life with the students.

There were virtually no bilingual teachers or assistants in Russellville when she was growing up, so Vargas, the eldest of three children, had to overcome many language barriers on her own. Still, school fascinated her, and when she came home each day, Vargas would line her stuffed animals in a circle and pretend to give them lessons, she told students.

“I always do that!” said one of the students. The braided girl raised her hand, letting Vargas know she wanted to be a nurse – “the one who helps with babies.”